Timothy Hutten has performed throughout Ontario in both theatre productions and vocal competitions. Past musical productions include Oklahoma! and Anne of Green Gables, though he has also appeared in theatrical productions such as Little Women.

Timothy works as a part time nurse when not performing, and enjoys pursuing his passion for performance whenever he has the opportunity.

Clarisse Tonigussi is currently completing a Masters degree in the classical voice studies program at the University of Toronto where she studies with Jean MacPhail. She also received her Undergraduate degree in Voice Performance studies from the University of Toronto in 2015. Ms. Tonigussi has performed roles such as Emmy Perth in the opera Der Vampyr, Papagena in The Magic Flute, and First Spirit in The Magic Flute. Her chorus appearances include Romeo et Juliette with the Canadian Vocal Arts Institute, The Mikado and The Student Prince with Toronto Operetta Theatre, and Opera York’s The Merry Widow. She was a soloist with the Barrie Lyrica Chamber Choir, and performs with the Toronto group the Hedgerow Singers. For the 2017/2018 season, she will be touring across Canada, performing the music of Canadian women composers with the Canadian Women Composers Project. Clarisse is delighted to be performing with Opera Luminata as their featured soloist!

Hayden Tallon began his theatre experience at the age of 12, when his mother took him to see a production of Robert Louis Stevenson's "Treasure Island" in London, Ontario. Since then,Hayden has performed in numerous productions across Ontario, thrilling audiences with such roles as Jean Valjean in Les Miserables, The Beast in Disney's Beauty and the Beast, Bill Sykes in Oliver!, Oberon/Theseus in

A Midsummer Night's Dream and the title roles in Jekyll & Hyde and Dracula. Special thanks to Michael, Shoshanna, Ray, Glen and all the cast and crew of Opera Luminata.

Pablo Benitez (Tenor) is a native of Caracas, Venezuela.  Major roles include Edgardo in Lucia di Lammermoor, Camille de Rosillon in Merry Widow, Hoffman in the Tales of Hoffman, Pinkerton in Madame Butterfly, Ferrando in Cosi Fan Tutte, The Duke in Rigoletto, Rodolfo in La Boheme, Javier in Luisa Fernanda and Maurizio in Adriana Lecouvreur. He has also performed in the Zarzuelas La Revoltoza and La Gran Via.

​is a graduate of the prestigious Glenn Gould School of Music. Diego is a captivating operatic performer whose roles are too numerous to list.  Recently, Diego performed Carnegie Hall as well as performing the role of Q, in the premier of James Bond: A convenient lie which will be touring this fall.  Later this year, Diego will be performing the role of Capellio in Capuleti e i Montechi with Opera in Concert and he will also be singing  the title role in his third Don Giovanni.

Ashlie White originally hails from Alberta, where she received her diploma in Theatre Arts from Grant MacEwan University in Edmonton. Some of her favorite credits include: Martha (The Secret Garden), Clairee (Steel Magnolias) Penelope Pennywise (Urinetown), Lucy (You’re A Good Man Charlie Brown), as well as spending 4 seasons with the Edmonton Opera Chorus. She has been active with The Confidential Musical Theatre Project appearing in their productions of Nine (Toronto), and Kiss Me Kate (Port Perry). Ashlie has been with Opera Luminata since the beginning and is excited to be part of the original team. Up next Ashlie will be playing Blanche DuBois in Plain Stage Theatre’s production of A Streetcar Named Desire.

Adi Ranganathan has been singing for over 25 years and has branched out into a wide variety of music. He continues to hone his skills. His favorite part of this show is the part where lasers come out of his head!

Jennifer Elisabetta Centrone (Mezzo Soprano)
Jennifer is a sought-after and versatile performer, she has performed internationally. Her dynamic performances have received glowing reviews, including "Jennifer’s lush mezzo soprano voice is one of the most exquisite sounds you’ll hear..." and “I could not believe that this young woman had this unbelievable voice. It was staggering!” (Paula Citron).

Shoshana Friedman (Soprano)
Shoshana has garnered glowing reviews from her past stage and concert appearances. “A worldclass performance, passionate and mesmerizing”…”all the great diva powers of passion, control and range without the pretentiousness.” Ms. Friedman also starred in the Canadian Premiere of Grigori Frid’s one woman opera, The Diary of Anne Frank, and is the founder and musical director of Broadway North Youth Theatre, in Newmarket. 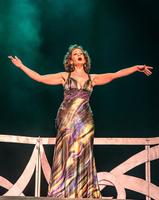 Alix Kingston is a Bachelors of Music graduate from the University of Western Ontario who, after a brief career on Canada’s East Coast has returned to her Ontario home. Alix’s has also performed with Opera Hamilton, The Baker Street Victorian Carollers, The Gilbert & Sullivan Society of Nova Scotia and the Juno Awards to name a few.

Most‎ recently, Alix performed the role of Anges Von Kurowsky in the world premiere  of "Hemingway and his Women" as well as the inaugural production of the Mississauga Symphony Opera (Carmen).
​

Oriana Abrahamse is an actress, singer and vocal coach who works throughout the GTA. She currently sings in the ensemble of Opera Luminata and is an actor with AMP Talent Group.  Recently she has started performing in television/film and is enjoying the new challenges that these mediums present.  In the future Oriana plans to continue performing and is grateful for the continued support of her friends and family.

Mitchell Aldrich has performed across Canada and the United States. When he’s not performing, Mitchell is a Voice Instructor, Music Director (Wizard of Oz, Dear Edwina), and Stage Director/Choreographer (Annie, Seussical the Musical, Shrek).

“Opera Luminata is an innovative company that has found a unique and invigorating way to enhance the inherent spectacle of opera. I couldn't miss the opportunity to perform some of the greatest ensemble pieces ever written on a stage bursting with talent and pyrotechnics.”